Jacob’s Ladder Machine Review: Should You Ditch The Treadmill?

The Jacob’s Ladder is a great piece of equipment for many different kinds of training. You can use it for weight loss, high-intensity interval training (HIIT), endurance, and rehabilitation. It was named after the stairway imagined by the Biblical Jacob in a dream that connected Earth and Heaven. Considering how intense and torturous a session on this equipment can feel many have jokingly said that it is, instead, the stairway to Hell. Jokes aside, it is one of the best full-body workouts you will ever have on one machine.

The Jacob’s Ladder is a particularly good option for those who are looking to recover from an injury since it is easy to alternate to. The machine sits at a permanent 40-degree angle, which is perfect for engaging the core and keeping the spine in a neutral position. A belted harness that is linked to the machine is then tied around the core and the climbing begins. The rungs begin to roll out automatically as you start climbing. As more tension is exerted on the belt, which means you start to climb faster, the machine automatically rolls the rungs out more quickly. A single session on this machine should give you a much quicker cardio workout while burning more calories then what you’d get with a treadmill. It’s also safer to use for your back, knees, and other joints.

While Jacob’s Ladder is certainly a great piece of workout equipment, why is it better than the good old treadmill? Are there any clear benefits it has over the treadmill? 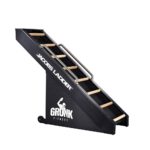 One of the great disadvantages of the treadmill or other basic cardio machines is that it burns calories at a rather slow pace. You’re going to be there a long time before you burn a significant enough amount of calories that you feel satisfied with your workout.

The Jacob’s Ladder, on the other hand, is designed as a simple ladder that forces you to climb and engage all of your leg and arm muscles. By forcing you to engage in a climbing motion, it burns calories at a much more efficient rate than a treadmill. It also works on your stabilizer muscles and your core in a much more effective way than a treadmill can.

The exact number of calories you will burn on a Jacob’s Ladder depends on your heart rate, the composition of your body, your metabolism, and the speed at which you climb. However, even with these factors held constant, the Jacob’s Ladder will still burn more calories than a standard treadmill. This was recently studied by the Louisiana State University, and the results showed that energy expenditure was higher on a Jacob’s Ladder than on a treadmill.

It’s safer for your body

Now, you might think that just because the Jacob’s Ladder burns more calories than the treadmill, it might be more dangerous. The good news is that it isn’t. Not only does the Jacob’s Ladder not compromise your safety, but it is actually safer than the stairmaster vs treadmill.

Think about it, running and climbing a ladder are two qualitatively different workout activities. Running will exert more stress on your knees and other joints and climbing a ladder, on the other hand, is a low-impact activity due to its very nature. Your spine remains neutral and the load is evenly distributed between your arms and legs.

One of the major downsides of a treadmill is that you’re probably likely to spend as much time fiddling with the treadmill’s settings as you do running. You don’t have to worry about that with the Jacob’s Ladder.

The Jacob’s Ladder is self-propelled, relying on the speed of your own climbing to alter the speed of the rungs. The belted harness around your waist is what determines that. When you reach the top of the ladder the belt is pulled and experiences tension, which tells the machine to roll out the rungs faster and the incline is also fixed at 40 degrees. The machine is very intuitive and has no learning curve.

In contrast, you often have to keep fiddling with the speed and incline settings on a treadmill as you try to find the work rate that is most appropriate for you.

Climbing is an important movement pattern

The Jacob’s Ladder is likely to feel very unique for you unless you’re an experienced climber. One of the reasons the Jacob’s Ladder is so unique is that you won’t find too much equipment in gyms that use the climbing motion for a workout. We are all used to running, cycling, climbing stairs, and even rowing, but not many of us are used to climbing.

Climbing is very similar to crawling, which requires your limbs to move contralaterally and for your core to stabilize. While crawling is highly functional, many athletes often overlook it. All of us were able to crawl very well at one point. In fact, our bodies are arguably designed for it. Indulging often and intensely in this motion, where a neutral spine is combined with the unified work of the lower and upper bodies is going to do a lot of good for your coordination, balance, and even posture. It might take you a while to get used to the motion when you’re first starting out, but you’ll get the hang of it before you know it. Moreover, it will be a much-needed break from the stationary bike and the treadmill.

The Jacob’s Ladder is not only more effective and safer than the treadmill but also loads more fun. It’s the perfect mix of power and endurance training, building your muscles while fulfilling your cardio needs. Whatever your reason for training, the Jacob’s Ladder is definitely something worth having a look at. 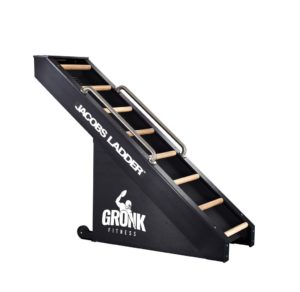